I think it’s my eighth week using public transportation. Not super sure but it’s around there somewhere. The weather is getting colder and colder and it puts a lot of pressure on things. This morning was my first taste of what I have to look forward to in the coming months. To start with, my bus was late. I came in time to work anyway because I have a brain and I’m not afraid to use it. But the minutes do tick when you stand there waiting. It’s dark in the morning until around a bit before 9 o’clock, and the heavy snow was falling. People start looking around wondering what’s going on. And then the bus finally shows up, about 10-15 minutes late. 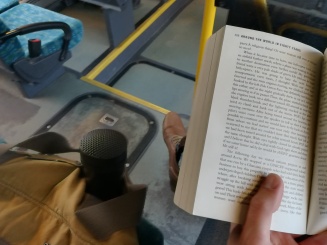 ut in my story there are), driving away full speed from dinosaurs, and on top of that, finds out there is a bomb on the bus that will detonate if the bus drops below 50 miles per hour. And after all of that finally makes it to our bus stop. The driver is still not a hero because nobody cares! But firstly because nobody knows the backstory.

Episode number two began when I was leaving for home. The bus left on time but stood still for about 15 minutes at a crossing because of a major queue – caused by the snow and slippery roads. After the traffic started moving we were on our way again. We got to a stop further down the road (and now we are about 20 minutes late) where we picked up a few more sorry souls. And this one bloke gets on and is really annoyed, he says to the bus driver, ‘honestly, what’s going on with SL?’ and the driver answers, ‘you have no idea what’s going on with SL’, and the bloke looks like he’s never felt that much pain in his life, and carries on to find a seat – probably regretting his attitude. SL is the company that runs the public transportation in Stockholm, and it stands for Storstockholms Lokaltrafik, which pretty much means public transportation in Stockholm… I realise I split two to three atoms there.

That episode struck me as being pretty pathetic – by the passenger that is. And to connect to my point earlier, the driver always takes the beating. The bus driver is always the one we like to point out and make fun of. I mean, how many bus driver songs didn’t we learn when we were at school?

Sure, nobody likes being late. And the weather doesn’t make it any easier. But the bus driver can’t get there any quicker if the circumstances don’t allow it. Sure, we can complain that SL isn’t prepared enough and whatever. But have you tried waking up earlier and taking control of your own situation?

Tune in next time when I attempt to create world peace. Besides, I’m a pageant boy – I know how to do that stuff. Goodness me, where is Batman when we need her…

Song of the day: Calvin Harris, Rihanna – This is what you came for