You know, Star Wars was released the other day. And I went to see it. I still haven’t mentioned it here in my blog – don’t worry, I wont spoil it! I will say this much: go see it. It was a lot of fun and a satisfying addition to the galaxy of Star Wars.

Everyone seems to have a relationship with the movies. It still surprises me though when someone says they’ve never seen one. But on the other hand they still know what it is! It’s almost like football – everyone has an opinion. Anyway my friend asked me about a month ago if he should get tickets for me as well, and I said, ‘Of course.’ The day finally came for us to go and watch the latest instalment of a movie franchise that has shaped a whole generation. Just before the movie began characters from the film greeted the audience – people dressed up (well obviously). Even Artoo was there beeping and bleeping, sounding just like a real parrot. 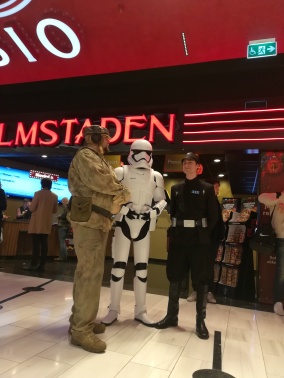 Someone was dressed up as a pink Stormtrooper. Didn’t quite get the point with the pink, I mean it’s not like you don’t get enough attention just wearing a normal Stormtrooper suit. Kind of like putting butter on bread and putting butter on again. But all in all it was fun and the movie was great.

I remember first seeing the movies. I was super young. It must have been in a galaxy far far away and we were living in England at the time. One thing that really got to me was when Han Solo was stuck in that strange grey box. My dad tried to explain what had happened to Han but I still didn’t get it. When I got a bit older I understood he was frozen in carbonite; you know, the stuff that happens everyday at work. Other strong memories that disturbed my childhood and turned me into who I am today were Jabba the Hut, the pit in the sand where people stood on trampolines to jump in, and of course the droids. And also the sound of those lightsabers waving about, making magnetic force fieldy kind of noises.

The first three (episode four to six) are good, then came the middle three. I don’t know what George Lucas wasn’t drinking when he made those, because they were crap. And then episode seven came and Star Wars was saved again. Probably because Mr Lucas was removed. Listen to me, I’m treating Star Wars as if it mattered! I wont criticise him too much. After all, he is behind Indiana Jones. And I did want to be him when I was small. Indy that is! And I still do. Well anyway, The Force Awakens was very enjoyable. Just so you know, I’ve been listening to the soundtrack of The Last Jedi the whole time writing this. I know, very disrespectful. May the force be with you.