I have never reviewed a book before so this should be exciting. It kind of happened out of the blue. I contacted the publisher of Kimi Räikkönen’s biography, a Finnish publisher called Förlaget, with another question altogether, and they ended up asking me if I would like to review his book.

I said of course. Obviously. So it arrived in my letterbox at home, not a moment too soon and I dug into it as quickly as I could. For those of you who don’t know who this weird named person is, it’s one of the modern generation’s top Formula 1 drivers; World Champion with Ferrari in 2007 and multiple race winner. That he would release a biography wasn’t quite expected, and I found out about it pretty late. 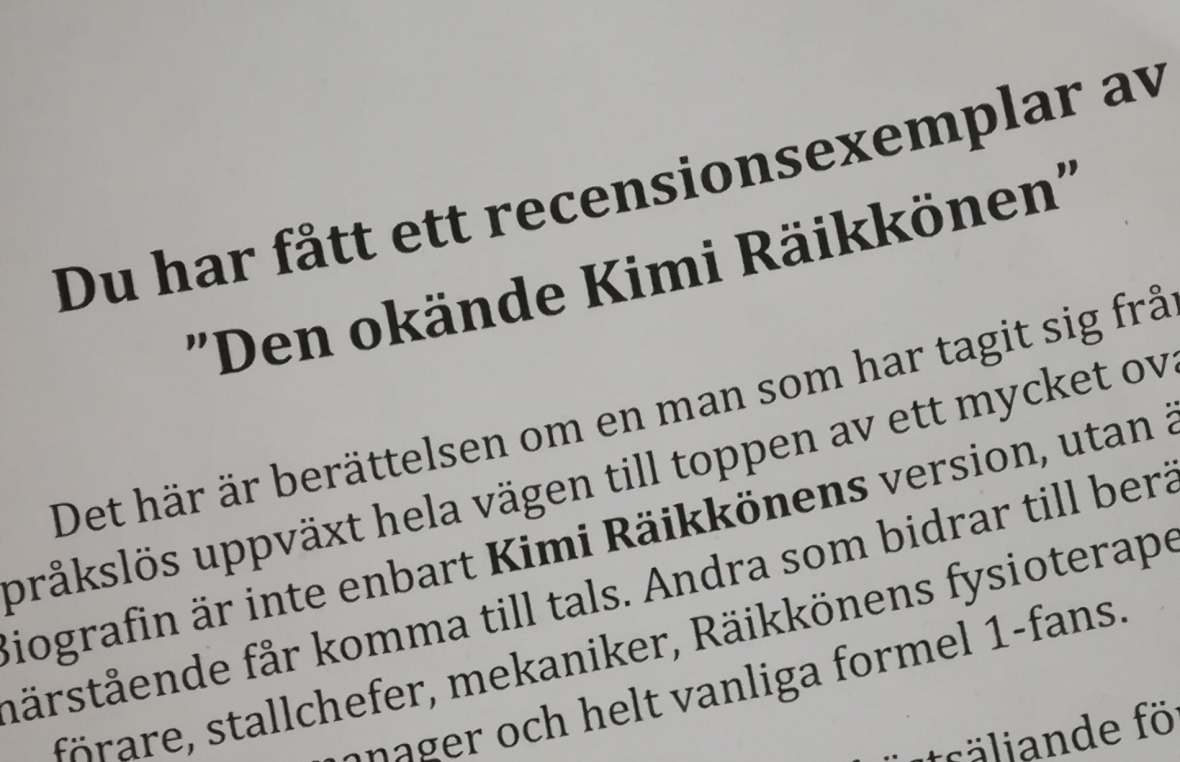 This is the letter I received with the book, basically telling me what it is!

I’ve read a lot of them. Biographies of Formula 1 drivers that is. So I was looking forward to this one simply because Kimi Räikkönen is such a unique character. The book is a lot of fun, and vital, if you are a fan of Kimi’s. The writer of it, fellow Finn Kari Hotakainen, is clearly not a follower of motorsports. It was evident the first few pages, and initially let me down a little. But after a few more pages I actually appreciated that fact. It gave the book another flavour, a flavour of really looking in from the outside, a sense of “learning” about Kimi’s world. So, after having read it now, I think Kari Hotakainen did a great job with it. Well done. And it has a great flow to it and Kari colours different situations in a very interesting way.

So far it’s only in Swedish and Finnish. The English version is being translated right now and will be out in October. I really hope they get it right, because so much can be lost in translation.

The book runs through his career, from the start up until 2018. If you can get your hands on a copy of the book this year, it’ll add an extra depth to the read, just because it’s so fresh.

As for interesting stories and anecdotes about Kimi, there are several in the book. The really interesting thing about him is that he’s such a normal person. Racing is his job, and apart from that, he loves being with his family. He was also a heavy drinker – no secret to Formula 1 fans however. He is your stereotypical Finn I guess. The book covers all his career moves, from the early stages moving up to Formula 1, leaving Formula 1 for rallying, and coming back. A few sad moments and of course the happier ones. Here is a translated short story I did from his book:

“2013, Helsinki Airport. A plane chartered by Kimi takes off heading for Zürich, his home. On-board, apart from Kimi, are Illu Suhonen, Fore and Seba Koronoff. About halfway there Kimi has a sudden brainwave: it would be great to go to the moon. You can’t fly to the moon so you’ll have to make do with a moon landscape. The closest thing would be Iceland, which means Kimi asks to be taken there. The captain tells him that the fuel won’t last all the way, and that they would have to refuel in Oslo. A sober thing to say to the less sober. They touchdown, fuel up, go shopping for a Norwegian cardigan and carry on towards Iceland. When the plane lands at Reykjavik Airport Kimi finally get’s to see his moon landscape and is at ease. A few more days are spent on the island whilst getting to know a spa called Blue Lagoon. Then they go back to Switzerland.”

The book is full of silly little stories like that, and they really give a more colourful picture of a man that usually doesn’t have a lot to say. Or so it would seem. Well actually, he has chosen to speak very little with journalists and press surrounding Formula 1. In private he won’t stop talking apparently! If you are a Kimi fan, read it. If you are a Formula 1 fan, read it. If you are looking for an uplifting and sweet story, read it. Go get a copy of The Unknown Kimi Räikkönen!